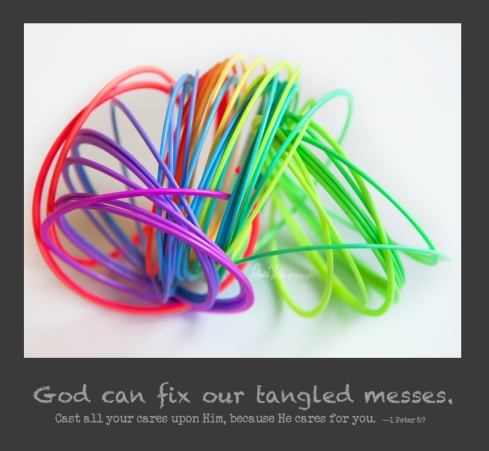 I have a little friend I sometimes pick up and take to school, but since her older brother and sister have to be in school earlier, she comes to my house for about an hour.  She loves playing in my office and pretending it’s a secret lair.  She also loves playing with toys my second son had as a little boy that my granddaughters now enjoy.  One of those toys is a plastic rainbow Slinky.  Just as it was time to take her to school, she brought the Slinky to show me she had gotten it tangled.  Her sweet voice was so apologetic.  I took the tangled mess from her little hands and said, “That’s okay.  I’ll take care of it.”

Later as I began to untangle the Slinky, I believe the Holy Spirit helped me to see that we are like my little friend, handing our tangled messes to our Heavenly Father when we can’t fix them ourselves.  I had created a tangled mess this week, but Father was so tender and loving when I handed Him my ‘Slinky’, and people I had hurt reflected His mercy and love as well.  I’m so grateful I can go to Him with my messes and not be scolded or turned away.

“Like as a father pitieth his children, so the LORD pitieth them that fear him.”  —Psalm 103:13

Just a transplanted Okinawan-French Southern girl with a wee bit o' Irish, sharing photography and what I'm learning about spiritual things, including putting off legalism and religious traditions, and embracing God's matchless love, tender mercy, and amazing grace! END_OF_DOCUMENT_TOKEN_TO_BE_REPLACED
This entry was posted on Saturday, November 9th, 2013 at 1:00 am and tagged with children, forgiveness, God, grace, Inspirational, love, mercy, quotes, symbolism and posted in Inspirational. You can follow any responses to this entry through the RSS 2.0 feed.
« Tickle My Ears, Tell Me What I Like to Hear
Just Don’t Listen to the Lies »