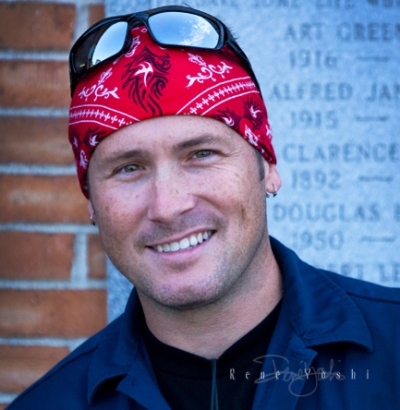 Meet Lyle Newell, founder and ministry leader of Christian Life Coach Ministry. I met Lyle a few weeks ago while volunteering with a local fire department’s biker’s breakfast fundraiser, a breakfast held before the annual toy run to benefit The Shriner’s Hospital. He was one of the bikers riding in the run.

He told me a cute anecdote related to biking. While gassing up his motorcycle one day, a van drove up and he heard a child say, “Mom, look! A biker!”

“Where?” thought Lyle as he looked around and realized the child was talking about him.

Since I also had the privilege of riding in the Toy Run, I was able to spend some time getting to know Lyle through the event as well as through Facebook. He is the husband of a lovely wife and father of two sons. He has a lot of energy and seems to have a genuine love for God and people.

You can find out more info or contact Lyle through the Christian Life Coach Ministry Facebook page.

Serving others – One life, One moment, One step at a time.

If you liked this, you might also like Leave No One Behind, in which Lyle is pictured wearing the “Born2” t-shirt.

Have you ever noticed that well-disciplined children seem happier? Proverbs 29:17 says, “Correct thy son, and he shall give thee rest; yea, he shall give delight unto thy soul.”

“Instruction improves the innate powers of the mind, and good discipline strengthens the heart.” —Latin proverb

“Discipline alone will not produce maturity, but maturity will not occur without discipline.” —Pastor James Lake in a sermon entitled “Stewardship of Discipleship”

“I’m not raising children; I’m raising the grownups they’re going to be.” —Louis C.K., comedian in ‘I’m Not There to Make Them Happy’: Comedian Offers Incredibly Insightful Take on What Kids Really Need from Their Parents

Have you ever seen undisciplined, disrespectful children and their parents. It ain’t pretty, is it?

“Parents who are afraid to put their foot down usually have children who step on their toes.” —Chinese proverb

“Give your children too much freedom and you lose your own.” —Russian proverb

Another thing that can make a child mean, angry or discouraged is treatment that is unjust or too harsh.  Although the Bible teaches corporeal punishment, and I believe it is appropriate at times, some have used the proverbs to justify abuse. Abuse is never justified. One such verse is Proverbs 19:18, which in the King James version reads, “Chasten thy son while there is hope, and let not thy soul spare for his crying.” Although it could be understood to mean parents shouldn’t let a child’s crying keep them from disciplining, some have interpreted it to believe they can keep beating their child despite the crying.  Young’s Literal Translation says, “Chastise thy son, for there is hope, And to put him to death lift not up thy soul.” Most other translations are similar and imply either that parents are to discipline their children and not contribute to their ruin or an early death, or to not desire the death of their children but to have hope that they can be disciplined.

And, ye fathers, provoke not your children to wrath: but bring them up in the nurture and admonition of the Lord. —Ephesians 6:4

Fathers, provoke not your children to anger, lest they be discouraged. —Colossians 3:21

“No man commands ably unless he has himself obeyed discipline.” —Latin proverb

Discipline is not punishment, although it may include it. Think about how you discipline yourself. Discipline is more about discipling, teaching and training. Sometimes we adults want to be mentors or disciple someone, but we forget or don’t even consider that our children are disciples and we are their teachers. Discipleship is more than going through a curriculum or teaching rules, regulations and religion. It is living and walking together through life.

“You shall teach them diligently to your sons and shall talk of them when you sit in your house and when you walk by the way and when you lie down and when you rise up. —Deuteronomy 6:7

God doesn’t just teach you things for your benefit. He wants you to pass on what you’ve learned to the next generation. —Revive Our Hearts e-devotional

I once read a book… I think it was Shepherding a Child’s Heart by Ted Tripp… in which the author revealed that during a power struggle over a toy, both the child who tries to take the toy and the one who refuses to share have a heart issue, so the toy is taken from both as part of a lesson and training regarding selfishness. Oftentimes, parents focus on the behavior of the child who tries to take the toy and then proceeds to teach him or her it is mean without also dealing with the selfishness of the other child who doesn’t want to share. There’s a balance, of course, but I thought it was insightful.

“For those of you who are trying to correct your children, if you’re focusing on the behavior instead of the attitude, that’s why you’re not getting anywhere. You change the attitude, and the behavior will take care of itself.” —Steve Cobb in his sermon “Beyond the Shadow to Reality” (March 2011)

“Childish people are ego-centric; often they don’t even realize that they approach everything and everyone as somehow being about themselves. Much of their displeasure or discontent results from the fact that others see life differently. Childlike people wonder about things, are alert, have questions, are ready to learn; they also know how to jump up and down with glee, and really enjoy things.”  —Moishe Rosen, Jews for Jesus founder

Disclosure: Links to products are provided only as a resource. I do not make any money by providing them.

This is in response to a few things that have come up recently in different conversations, one of which was a friend’s recent post on Facebook about how we should dress.  He posed a few questions and gave his own opinion.  Another friend commented by saying, “Jesus doesn’t seem to care about your fashion sense.”  If that’s true then why do some Christians make such a big deal about trying to get others to look just like them?

You can be a clean-shaven man with a short haircut and a suit and tie; a woman with long hair, no makeup, no jewelry, and wear a prairie dress; or a preacher with pomaded hair, jeans and a button-down shirt, but if the goal is to become more righteous based on what you wear or don’t wear, what happened to the heart or God’s mercy and grace as expressed through Jesus’ atoning work on the cross?  Don’t those things matter more?  If we’re trying to get people to be more like us, isn’t our focus in the wrong place?

When Hudson Taylor, the great Christian missionary, moved to China to share the Gospel with them, he didn’t teach them to become like him.  Instead, he grew his hair and braided it into a Chinese cue and wore Chinese clothes.  Unlike Hudson Taylor, many early American sects forced African slaves and Native Americans to dress like them.  They even destroyed everything having to do with their culture, and the very people they were trying to convert learned to hate the white man and his Jesus.  God never commanded people to get rid of their culture.  He commanded them to turn away from and stop worshiping idols.

Please don’t let someone mold you into their image and into becoming a cookie-cutter Christian.  If they don’t accept you without the clean-shaven face, short hair and a suit and tie, then they aren’t following Christ’s example, and you should be careful about following them.  And please don’t be a cookie cutter who tries to mold someone else.  You know what Jesus said about the scribes and Pharisees, right?

“Woe unto you, scribes and Pharisees, hypocrites! for ye are like unto whited sepulchres, which indeed appear beautiful outward, but are within full of dead men’s bones, and of all uncleanness.  Even so ye also outwardly appear righteous unto men, but within ye are full of hypocrisy and iniquity.”  (Matthew 23:27, 28)

Edited August 19, 2013 to add that I should have included that I used to be both a cookie-cutter Christian and a cookie cutter.  See the comment below.  I plan to do a follow-up post soon, one I’ve been planning to do, tentatively called I Used to Be a Pharisee.

“Or what king, going to make war against another king, sitteth not down first, and consulteth whether he be able with ten thousand to meet him that cometh against him with twenty thousand?”  –Luke 14:31

Have you ever decided or promised to do something and later realized you wouldn’t be able to make it happen?  Were you embarrassed or felt like you had failed?

A few years ago while outside photographing some flowers, I came across an interesting sight.  A tetragnatha pinicola spider appeared to have sensed movement.  It slowly made its way to the center of the flower where a honey bee was gathering pollen.  As both the spider and honey bee drew closer together, the spider carefully stretched out one of its legs, drew it back again, and backed away.  It appeared to have examined its potential prey and counted the costs before attacking.  The bee on the other hand seemed quite undaunted by the spider’s presence or covert probe.  The encounter reminded me of Jesus admonishing a great multitude of followers to count the cost of becoming His disciple (Luke 14:25-35).  A Japanese proverb says, “A monk for just three days,” describes a person who hadn’t fully considered what he was getting into and gave up when things became too difficult.  Jesus never promised us a rose garden here on Earth.  Following Jesus has cost some people their family, friends, jobs, and even lives.  A Dutch proverb says, “What costs nothing is worth nothing.”   Just as Jesus used the common examples of a man building a tower and a king going to war, we, too, should count the cost before venturing into any potential unknown.

“Before you act, consider; when you have considered, ‘tis fully time to act.”  —Sallust, Roman historian